You gotta fish when they’re biting 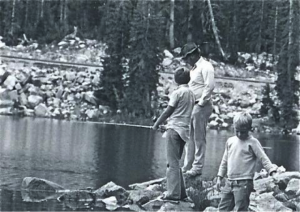 One frosty morning before dawn Dad whooped outside our tent. “C’mon, get up. Time to catch fish.”
We groaned. “It’s cold! Come back when the sun is up.”
He was unfazed. “If you want to catch fish, you have to get out when they’re biting. And they are biting now. I’ve got hotcakes on the griddle and the fire is crackling. Nap later.”

We stumbled out to a toasty fire and a hint of color behind 12,000-foot peaks. Fog swirled around the lily-ringed lake below camp. Twenty minutes later we had lines in the water and by the time the sun warmed through our layers we had a string of fish.

As we walked back to camp Dad said, “I want you to remember today. You might not feel like dragging your britches out of bed. You might not feel ready to take an opportunity. But you have to get out when the fish are frisky, not when it’s convenient for you. It’s so simple but most people miss it, either too scared, unprepared, or unwilling. If you act, you will always have opportunities.”

Years later I considered applying for a promotion and found myself at Mom and Dad’s table. “I’m not sure if I should. Other people know more than me. I’m really young and don’t feel like I’m good enough.”

They encouraged me to go for it. “No one feels ready for a big step. If you wait, the opportunity will pass. Throw your hat in the ring and if you get it, work your guts out. If you don’t, what have you lost? You won’t regret the chances you take but you might regret being too hesitant to try.”

So I applied and somebody more qualified got it. I didn’t feel bad because it was a chance to show that I wanted a career there. In an unexpected twist, a year later, the same position came open again. I had grown a bit and this time I was offered the job. I still worried that I was inadequate, but good people helped more than they will ever get credit for, more than I deserved. Five years later, I still feel lucky—every day—to have this job. If I had waited until I felt ready, who knows when the fish might have been biting again?