Parenthood, Part 4: The Secret to a Long Marriage 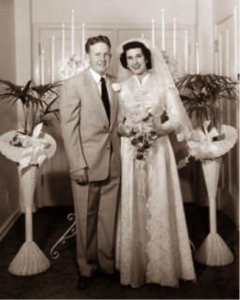 Parenthood Part 4 – The secret to a long marriage

An interviewer asked a celebrity wife with a long but not always smooth marriage, “What’s the secret of staying married?” The answer. “Don’t get a divorce.” Glib, but it stuck with me so I’ve been mulling it over, and this seemed a fitting topic in honor of my parents’ wedding anniversary last Monday. They spent over 20,000 days and nights together and on every one—the hard days, the great days, the ones in between—they chose to stand by each other.

I wonder. What if just deciding never to give up on each other is the difference in making it work with the people we care so much about? Well, that still doesn’t make it easier to live. I mean, it’s ridiculous that getting along is often the hardest thing we do each day, but it is. Sure we say that if we still have each other we’ll be alright, and of course that’s true. I have also come to believe that, “as long as we have each other, we will never run out of problems.” (Thanks, Despair Inc., for that nugget.) So if there are two people left in the world, there will be relationship issues. Add more humans with our endless variety (in an office, for example), and conflicts multiply in infinite ways.

Maybe because it is so hard, we skirt around our untidy relationships by telling ourselves that we are here to check off a list of deeds that we hope will add up to heaven’s admission price. But here’s an unsettling notion. What if all that busyness is just backdrop for the real story, the one in which we learn to love one another? I have come to believe that our real test is not how much we get done in this life, but how fully we love. That does not mean the breathless exhilaration of new relationships, but by how we react when our loved ones have stumbled, head down, chin first, tumbling from perfection.

I know my parents had plenty of doe-eyed moments. They had a great marriage; they laughed, their core values aligned, they turned each other on, and were absolute best friends. They also had glaring flaws. I adored my dad and thrived on the passion he threw at everything. That same passion meant he sometimes plowed right over my mom when she worried about how his big ideas would touch earth. The man couldn’t pick up a dirty sock to save his life or operate a twist tie. Likewise, I love and appreciate my mother more than I can say, but her honey-do list was endless and she could get uptight. Finances were an ever present strain and I remember them both getting into it when we traveled, she wielding a map and he missing their exits.

Only they and God know how hard it really got at times. Once my mother sat on the front porch and wept resentful tears after he left on a business trip and wondered if she had the strength to still be there when he got back. I don’t think we kids ever had any idea. How lucky we were that our parents made it. My own first marriage did not and maybe that is why I admire them so much. Now I want—more than anything in the world—to get this one right. So how did they do it? Yes, compatibility mattered in that they found their own groove, but one element seems universal. No matter what they ran into, they made the choice to forever stand by each other.

This gave them the time to grow together until they were hardly separate beings. When they finally parted after 55 years, my mom buried part of herself. Then we realized something remarkable, the beautiful fact that part of Hartley still lives on. Through her.

(P.S. Disclaimer: when I say no matter what, I’m not talking about abusive relationships or other catastrophic breaches).