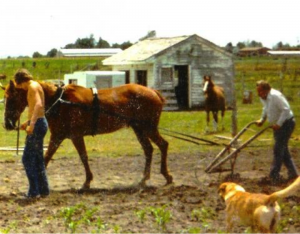 The Purpose Paradox – Never Giving Up While Letting Go

“You have a purpose,” my folks would say, “you just have to let it find you.” My mom often remarked that everyone has unique talents and that “We all matter, every single day, but not everyone realizes it.” Once their life’s purpose found them, optimism glowed like soft light around Hartley and Gaye. Even after the darkest Decembers—traditionally the slowest, most discouraging month in their business—they kissed on New Year’s Eve and said, “This year for sure.” They stayed on course knowing that they were made for this.

That kind of certainty resulted in a lovely—and I believe powerful—paradox. On one hand, a fiery commitment to their cause drove them when odds didn’t look good. In this way, they seemed like the quintessential American entrepreneurs who latched onto an idea and wouldn’t let go for the world. But they weren’t pit bulls about it. They weren’t like little monkeys with their fists caught in a trap because they would not release the banana. Rather, they had a quiet, albeit passionate, belief that destiny was on their side. This knowing got them through setbacks and made them free to enjoy the process. They didn’t put off time with their kids and they kept the mood light under deadline.

In visualizing their parking spaces, so to speak, they were motivated to go looking for a spot when others give up before trying. It was a two-part proposition: belief and action working in tandem. They harnessed power in what might seem like opposite forces: conscientious effort and simultaneous surrender.

It almost seems like a marriage of Eastern and Western philosophies, of balance between yin and yang forces. In some Eastern thought the highest stage of enlightenment results in a person wielding the least effort for the greatest result. In harnessing powers of meditation and intention, a person acts as a magnet toward purpose. Helpers come out of the woodwork, summoned by a common urgency. Doors open without effort. When we are in this zone, we flow with the current toward our purpose rather than struggling upstream away from it.

The notion that “if it isn’t hard it will not be worth it” evaporates when we realize that suffering does not equate to reward. Sure the work might BE hard, but when we are aligned with our purpose, it doesn’t FEEL hard. Furthermore, there are many who say it takes no more effort to become great than mediocre. This was a point made in my favorite business book “Good to Great.” Rather, building a great company starts with finding the right purpose and spending energy on the right disciplines rather than ineffective habits. Some even say the effort expended is actually less and that the rewards of excellence are self-sustaining. This has been my experience, that when something is right, pieces come together and a team is synergistic rather than bickering.

Yet, while hard work is admirable it can be counter productive if taken to the extremes of control and exhaustion. Needing love too badly can repel it. Making peace with being single has sometimes opened the door to new relationships. It is strange how sometimes couples have become pregnant after finally adopting. If we want success, clawing our way to the top can thwart our efforts while helping others succeed can pay unexpected dividends.

One of my FaceBook friends posted a while back, “You can have anything you want when you no longer want it.” Funny. And more true than I’d sometimes like to acknowledge. I want what I want and I want it now! I find, though, that when I just crave what’s best without needing to control the timetable and the “how” I often get what I want, sometimes through the most roundabout circumstances.

Here is a summary of principles in the paradox:
· Believing in a harvest by planting a garden. (Faith and works).
· Unfailing expectation of victory in the end while confronting the brutal facts of today.
· Being independent from the opinion of others while harnessing the power of working together.
· Needing nothing. Attracting everything.
· Believing that I can make a difference and still reigning in my ego–it’s not all about me
· Recognizing individual purpose and limitless potential. Acknowledging that I’m only a speck in an infinite universe.
· Expending the effort while enjoying the process.
· Never giving up the dream but surrendering control of the details.