“She Was Such a Character!” 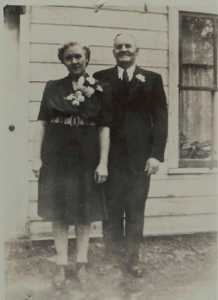 DEVELOPING YOUR PROTAGONIST IN FAMILY HISTORY AND MEMOIR

When I first saw my aunt Audriene last Wednesday my eyes welled up. She looked so good to me—old yes, in declining health yes—but she reminded me so much of my grandma. It caught me off guard because Grandma Anderson has been gone for more than twenty years. But there she was with snow-white hair and a soft lap that I could have crawled into. A few minutes later, she made me think of Grandma again with her quick wit and razor-sharp memory.

I came away with new insights about my family on a digital recorder. So indulge me for a moment with some highlights (I promise, I’m going somewhere with this). Grandpa grew up in a Danish-American town as the son of a pioneer boy who crossed from the old country on a boat and t hen to Utah in a covered wagon. When asked to describe the collective town culture, Audriene didn’t hesitate, “Easy going.” Of my grandpa she said, “Most men don’t care much for babies but he loved to hold them.” He connected easily with “babies, horses and plants.” Mary, my grandma, was his complement in everything.

When she was a teenage girl before World War I, her father taught her how to drive the Model T after she proved she could start it with the crank. When she met Grandpa she taught him how to drive, and did most of the diving their whole marriage—not just with the car, but in all aspects of their life together. Grandma’s friend once said, “You and Alvin have the best marriage of anyone in town,” but it was a backhanded compliment. “Of course he lets you do whatever you want.” Grandma replied, “Well, there you have it!” I asked my aunt if Grandma could be stubborn, “Oh yes,” and I wondered where this came from since she was also Danish. Audriene corrected me, “Well her father was English.” Oh!

My grandparents would make rich characters in a story and indeed, they were part of the supporting cast in the book I wrote about my folks. Actually, that is the point of this article: I believe everyone is the protagonist in their own epic saga and their stories should be preserved.

All great stories begin with great characters. So to begin a family history or a memoir, think like a novelist about how to discover your characters and then bring them to life on the page. Here are nine quick ABC tips:

In writing memoir and family history people often get bogged down in the details of timeline and facts. But consider this: in a generation, most people will not care about all that. They will be hungry to know who the people really were because in seeking their ancestors, they really want to discover themselves.

If all you do is paint a beautiful portrait in words without any other facts or biographical details, you will leave an heirloom as valuable as a Rembrandt.