Parenthood Part 9: A Valentine for Every Uneventful Day 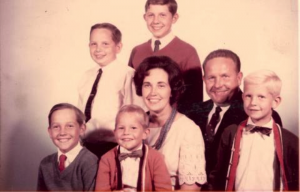 If Dad were here today, what kind of Valentine would he give my mother? Well, first off, let’s just get to the truth that he was never great at flowers and chocolates. If her happiness was caught up in these frilly details she’d be disappointed. He might pick up a card on the way home, he might not. I think though, that if he could come back for one more day, he would surprise her with what she never expected because he was deep down a hopeless romantic, crazy about her until the end. He said in an interview, “Gaye was the spark that started the fire. Without her, I’m zero.” You could see it when his gold-flecked eyes sparkled as they caught hers, the way he would pat her backside in passing or kiss her neck, even in their 70s. He saw in her the world’s most beautiful women. When we watched the movie “The Mask of Zorro” with Catherin Zeta-Jones he said, “That is my kind of woman. Like your mother.”

He described that when they met he thought she might be out of his league. She was from town while he was a farm kid. In elementary school she had been the tallest in her class and he was the shortest. He was skinny and she had curves in all the right places. There was also the fact that she was waiting for somebody else, but he was just competitive enough to go for it. Her dad took a liking to him and so my grandfather gave some man-to-man advice. “Hartley, if you want her, you fight for her.” He fought and he won.

On all accounts they had a good marriage. I remember as they approached their 60s we went backpacking. Val and I were in high school and found their contraceptives in our tent. Most kids are grossed out by the thought but we were all high fives. “Awesome! I hope we inherit that mojo at their age!” When he was ill right before the end he saw a Viagra commercial and he sort of chuckled, “The stuff doesn’t work for me. One thing about it, no less willing. Just less able.” (I am sure mom is dying to read this now).

When I was a young adult wringing my hands about whether I should get married my dad and I had breakfast one morning. He offered his two cents. “Rhonda, if you love him go for it. I wouldn’t trade all my single days combined for any ordinary married one.”

As life drew to a close, he would shut his eyes and remember so many days before. “It goes by so fast. I don’t feel one bit different inside than when I was that skinny kid. You don’t realize while you are hungrily turning the pages of your story that the last chapter comes before you know it.”

I think if he could give Gaye a Valentine, he would tell her that. He would say, “Holidays were nice and we had some first-rate adventures, but every uneventful day was a gift.” I think he would tell her once more how much the simplest pleasures meant: sharing meals, watching their children grow and best of all, drifting to sleep with her warm body snuggled into his.