Parenthood Part 6: Don’t let school get in the way of your education 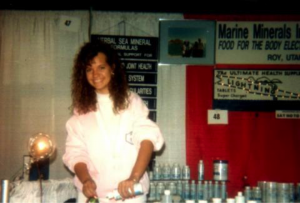 I had two parallel childhoods, one in everyday home life and the other one when I tagged along on my parents’ business trips. Their conventions were an incense-scented world where guys made portraits of customers in their former lives and where folks walked the exhibit hall wearing pyramid hats. I learned the finer points of colonics, healing crystals and carob cookies. What an education.

As this this bookish, slightly chubby kid I would plow through homework in an hour or so each day while we drove cross country. Then I would get lost in a library stack and every so often my dad would say, “Look around once in a while. It’s fine that books take you places, but don’t miss where you are.” I would put my book down and by doing so I absorbed great swaths of America. On these trips, I learned to love architecture and history, rolling fields and the glittering pulse of big cities.

At our health food conventions, I took on another persona, that of shop kid. Aside from the fringe element, most of the other booth proprietors were families like ours with the American Dream drawing them into the emerging natural health movement. Buying a 10 x 10 booth draped in royal blue tricot felt like claiming a homestead out west. These trade shows were like the village market in a tight-knit community, a place I would always be from, no matter where else my life led.

My parents had a neat-o light bulb demonstration to show how minerals conduct the body’s electrical impulses, which became a trademark of sorts. When I was 10, they pulled out a packing crate, told me to stand on it and handed me the demonstration kit. “You’ve been watching this your whole life. You are ready to step up.” I was terrified and exhilarated while my Dad gathered a crowd so I just broke into a toothy smile and went for it. Show time.

They taught me how to set up a booth and sell product for nine hours straight, about entrepreneurship and public relations in the most basic form. I discovered how much I love people in all their variety, and to bask in the end-of-day sales tally. They also taught me that in seeking truth and knowledge, one must ask questions, even of those in authority.

When my brother Val and I were 21 and 16 respectively, our parents thought we had absorbed enough to cover an event on our own. They signed up for a show then had a conflict so they asked us to cover Boston. We loved the idea of a convention on our own in a new city but I hesitated because of my class load, especially AP American History and AP Prep English. I wasn’t sure if I could pull it off but dad said, “Rhonda, don’t let school get in the way of your education.”

So we went. We worked the booth then took a few days to see New England. We spent Thanksgiving morning at Plymouth Rock and had our feast in a bar because that was all that remained open. We saw Lexington and Concord, the Salem witch trials site, and drove up the coast to into Maine. My English and history classes had just covered early America so when I saw where Hawthorne wrote The Scarlet Letter, and where the Revolutionary War unfolded, my textbooks came alive.

My six brothers all have basically the same story, just with their own particulars. Mom and dad presented the country as our playground. They pulled us out of school a week at a time, and when we barely had our driver’s licenses they divided the company into nine equal shares with us. They made anything seem possible, gave us a sense of responsibility and this made us want to learn all we could. We were a different kind of family and sometimes in school I felt awkward and out of place. “That comes with the territory,” they would say. “Institutions shape you to somebody else’s idea of success. People with degrees thought we were crazy.” So even with my desire to fit in I would not have traded my experiences, not for all the cute clothes in the world.

My parents were non-conformers so maybe I rebelled by being conservative. I went on for a conventional education and now work at a college. Yet, I like myself best when I am grounded by knowing that a piece of paper does not make me smart. I am happiest when I am learning in new ways. I feel most hopeful when my eyes are wide like that little girl gazing out at America.