“This Time For Sure” – Failure and Optimism 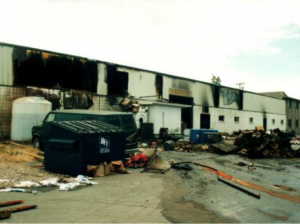 A colleague recently asked me if I think failure is essential to becoming a good leader, and it got me thinking about some times my family and I have been smacked flat.

Hartley and Gaye Anderson had a few bad ideas along the way, some stinkers in the product name department (Queen Clean for an herbal cleanse, for example), and they dealt with a flake or two on their journey. While they were getting the mineral business off the ground, they put out a commemorative souvenir called “Golden Spiked Water,” for the 100th anniversary of the transcontinental railroad’s completion–Great Salt Lake water in a clear plastic flask. Big flop.

But here is what separates successful entrepreneurs from those who go back to a 9-5 job: an indelible optimism that enables them to try again. My parents cradled this kind of faith, especially during times of failure, loss and heartbreak. No matter how difficult the prior year might have been, no matter how hard it was to pull off another Christmas miracle for their family, New Years Eve was one of the biggest holidays for our family. It represented a fresh start, another chance to make it work. Every New Year’s Eve Mom and Dad would look at each other, grin and say, “This time for sure.”

When things got tough, they knew to the core that they had something special, a purpose worth fighting for. They met people all across the country—and later all over the world—who told them how much our products had improved their lives. Those interactions were enough to keep them going after a rough week and until the next order slid into their PO box. In sticking with it they ultimately helped millions worldwide and created an entire category. If a health product is from the Great Salt Lake, it is either made by my family or has its origins with them. They made a respectable living doing it–never got wealthy–but always had enough to eat and a roof over their heads. Now they would not trade their experiences or legacy for all the money or accolades in the world.

The upside of surviving failure is that it teaches us that a mistake or a disaster is not life ending. A person or a business can recover. In 1995 my family’s operation suffered a devastating fire, they day after they returned from biggest trade show in their busiest month on record. One day they were growing like crazy and the next their dreams were gutted like the inside of their building, reduced to ash and smoke. They could not have predicted, however, that it would be a time of real closeness and camaraderie at the company. In a surprising twist, the insurance money allowed us to rebuild bigger and with a more efficient design. We were better off after, not in spite of it but because of it.

But what about when failure it is our own doing? From my own mistakes, I know for sure that I much prefer to learn the easy way. It is better to be coachable by wiser people, and humility also helps. Taking your lumps has a way of putting folks on your side who will throw you a rope if you start sucking water. I also now know that I am completely capable of choosing the hard way because of my own selfish, obstinate, rebellious flaws. That’s sobering. So don’t think I’m romanticizing failure here. It stinks. Getting your teeth knocked out ought to be the method of last resort.

But sometimes it is part of the process. I remember after a particularly painful lesson the hard way, I confided to my parents in the understatement of the year, “That didn’t work so well.” They then told me how Thomas Edison had thousands of experiments on the light bulb that might be considered failures. He said, “If I find 10,000 ways something won’t work, I haven’t failed. I am not discouraged, because every wrong attempt discarded is another step forward.”(Footnote 1)

So do I think failure is essential to become a good leader? Absolutely. Until we experience failure we are prone to recklessness for not knowing it and paralysis in fear of it. The memory of failure leaves respect for its possibility, and liberation from a fear that failure is the end. It blunts the ego and plants seeds of empathy.

Look for more on my blog at www.rhondalauritzen.com or on Twitter @rhondalauritzen, where you can join the conversation #LegacyInStory

Rhonda Lauritzen is the author of Every Essential Element, available on Amazon.com in print and Kindle format for $3.95. (http://www.amazon.com/dp/B007VTY1R6) By Like Rain Publishing (www.likerainpublishing.com), which is helps business leaders complete their stories. Follow this series and others, including essential elements of parenthood at www.rhondalauritzen.com