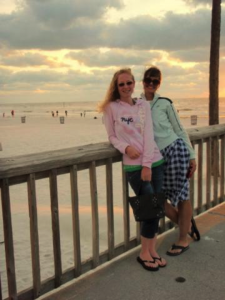 Stephen King wrote, “I never had any friends later on like the ones I had when I was 12.” Around that age I met a willowy redhead named Megan. She was a dancer and a free spirit who never wanted to grow up. I was a “big boned” olive-skinned brunette with a bookish disposition and an after-school job. On the surface we might not have seemed like BFFs but in the decades since I have discovered that we are kindred spirits in ways that defy words. We’ve survived boyfriends and breakups, children and the lack thereof, marriage and divorce, times when we’ve had nothing but time, and times when we’ve eked out some out of nowhere. She is the Best Supporting Actress in my story, and I’d like to think I am that in hers. I could write a whole book just about her…maybe someday I will.

In your story, who are the people who were there when no one else was? Who have you called when you needed a pep talk or a reality check? Who makes you say, “I like myself best when I’m like you?”

I think of these people as the supporting cast, and they serve an important purpose in any memoir or family history. They can add comic relief or present different perspectives to the protagonist’s view. They can say things your leading lady/man never could or would. They make the main character seem somehow more.

In collecting my family’s stories, I have loved shining light on the “best supporting cast” because in learning of them, I understand myself better. My grandma Laub always set an elegant table, and Grandpa Laub was a small business owner, golfer and a lifelong member of the Chamber of Commerce. Grandpa Anderson was easy going and Grandma was independent. I see all of those traces in me, and these are the parts I like best. In my siblings I see some personality threads that I cherish and others that I work to overcome. The older I get–in spite of my younger efforts–the more I become my parents. I could do worse, actually.

I hope this gets you thinking about your supporting cast. To jumpstart your process, here are some tips followed by questions to draw out insights.

First the tips:
• Write your first drafts drawing from vivid memories and with as much emotion as you can conjure. Bring the supporting characters to life on the page with believable details and their endearing quirks much like you would with your protagonist (see my protagonist article for ideas).
• Don’t write first drafts with them–or anyone else–figuratively watching over your shoulder. If you worry what they will think or how their memories differ, you’ll find yourself with writer’s block and your storytelling will be stiff.
• Once you have captured what you feel is an honest and rich depiction of these characters DO NOT charge in and show them your work. Not yet. You need some time to let it sit and to come back with a fresh eye toward sensitivity. (We’ll talk about sensitivity in a later article.)

Here are some questions to spark ideas about your supporting cast:
• Was there ever a time in your life when others turned their backs, but someone remained loyal?
• Have you ever felt you were better because you were part of a team than alone?
• What are life lessons you have you learned from your children and in what ways have they been the supporting cast in your story?
• Who are the people who make you feel most like you, and how do you act when you are together?
• Who have been your best friends throughout your life? How are they similar to or different from each other and you?
• If you need encouragement, who do you call?
• Who is the wisest person you know?
• Let’s say it is 2 a.m. and you need an emergency favor. Who could you call with no questions asked?
• Whose number would you–or did you–dial from jail?
• In what ways have you become like your parents, and in what ways have you rebelled?
• Who makes you laugh the most?
• Who was the instigator or trouble/adventure when you were growing up? Who was the voice of reason? Which voice won?
• How would your best friends describe you when you were young? Today?
• What is a story your best friends would love to tell your children or grandchildren to embarrass you?
• Describe a time when you and your friends almost got in big trouble but escaped by the skin of your teeth.
• What would be the perfect weekend with your best friend(s)? Write about one that felt darn near perfect.