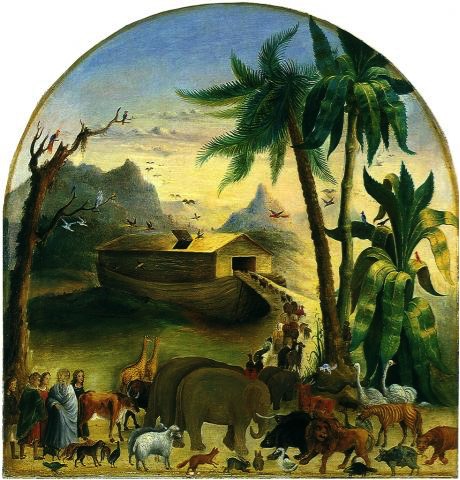 Inquisitive Part I: The Day I Lost My Faith

I’m not sure where my faith began, except that I was born into it. I can tell you when I lost it, though. More or less the exact moment. Alright, it may be unfair to lay blame on one specific day because nagging questions had been eroding the banks of my belief for a while. Still, one moment stands out in my mind, the moment I sat in Sunday School with my back rigid against a metal folding chair. It felt like a dam just busted, and it happened over something so small. After this, I would walk out of church for a decade. It would take a personal fall and a miracle to get me back.

I straightened up when the teacher taped a cartoon Noah’s Ark to the chalkboard. I heard—really heard for the first time—a story so familiar it was rote. There is no way that happened, I thought. I glanced around. The class looked adrift, nodding a little, raising hands to make inane comments, or just glazed over. I wondered, can I really be the only one not buying this? Before then I had never considered it. It was just a Bible story and a crowd pleaser among the primary set, what with the animals and all.

Now I had new ears. I was a college student away from home and newly married to a non-believer. He had a gay brother I adored.

The ark was suddenly a question, and along with it everything else.

I considered the details. The entire globe was covered with a flood. So where did all the water go? The faithful rounded up every animal, two-by-two? That means today’s biodiversity came from that limited stock? Just since Noah’s time? More troubling was this. Would a loving God kill all the people and animals to make a point? This story has problems on so many levels, I didn’t even know where to begin. I was dying to raise my hand, but that isn’t the sort of thing you do. The teacher was so earnest about it.

I had not been to church in a while and I am not even sure why I went day other than maybe I was not quite ready to let go yet. My young husband got perturbed when I attended, needling me for answers I could not give. He was a good debater and logical to the core. “How can you believe in a religion with so many holes? How can you belong to an organization that kicked out my brother?” I conceded each debate. I felt like I was losing a part of myself but it got harder and harder to hang onto it.

So I left church that day and didn’t go back. I mourned privately, without ever articulating why. I mourned the idea that something I believed my whole life wasn’t true. I mourned not being in on it with the rest of my family. I mourned losing this part of my heritage and my culture. I felt like a little house lifted from its foundation and dangling by a dubious crane. I had to decide, stone-by-stone, how to build a new base.

Ten years later I would tiptoe into the very back row of a Sacrament service, cry through its entirety and slip out before the closing prayer. I did not hear the speaker above the dialogue inside my head. I don’t know if I can do this. My friends will think I’m an idiot. My marriage might not survive another blow. How do I reconcile details that make no sense? Could the answer I got possibly be right, that I am supposed to be here? But I knew it was. That was the only thing I know right then.

The next week I made it through Sacrament meeting and Sunday School before tears overwhelmed me and I had to leave. The week after that I made it through the entire three-hour block, but still left crying. The following week I made a dear friend, a woman who would become one-part grandmother, one-part counselor. I began to sort through intense and conflicting emotions one week at a time. They asked me to teach Relief Society? Me? I haven’t opened scripture in a decade. That was when I began cataloguing questions, taking them apart and piecing the answers together into my new version of faith.